Investment casting, also known as lost-wax casting, is one of the oldest precision metal forming techniques used to produce near-net shaped metal parts in a variety of alloys. It is used mainly to reproduce complex, thin-wall components in many industries from the production of art, such as pocket cars, jewelry, and more sophisticated applications such as dental prostatic, medical devices, implants, endoscope components, automotive, and aero space parts.

The investment casting process begins with the fabrication of a sacrificial pattern made of either injected wax, printed thermoplastic (stereo lithography) or milled wax with the same basic geometrical shape as the finished cast part. Once the wax is formed it is assembled into a tree shaped delivery system that is usually encapsulated in investment refractory powder or the entire assembly is dipped into a thin layer of ceramic material creating a shell that is usually several thousand of an inch thick covering the pattern.

Once the refractory shell is dry the whole assembly is than put into an oven and heated until the sacrificial wax pattern has evaporated leaving behind a hollow cavity (Mold cavity) that is usually very precise. Hot metal in turn is poured into the cavity by means of either mechanical ladles or sophisticated induction casting equipment that employees vacuum and inert gas to melt the alloy under clean environment in order to avoid possible oxidation or porosity from being introduced during the casting process.

Once the metal has been introduced into the mold cavity it is allowed to cool down and then the shell or mold flask is cracked open revealing the casting assembly. The components are cut out of the casting tree also known as (runner assembly) and a minimum cleaning or milling is performed to produce the final precision net shape.

Our machines are capable of casting the following materials… 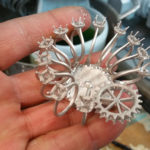 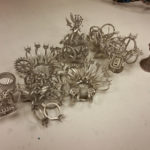 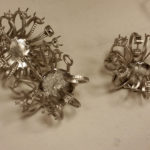 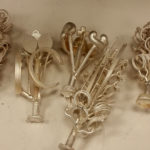